FWFTWFFacebookOpen CultureArtpaperOdbiornikHa Art!Polish Radio
The project First We Feel Then We Fall is the result of my prior artistic activities, as well as research on image structure and narrative in audio-visual realisations. Finnegans Wake is Joyce’s last and most mysterious work. Usually defined as a novel, it is a fascinating text where the Irish variety of English (Hiberno-English) enters into interactions with words borrowed from many foreign languages, thus creating an oneiric narrative full of historical, literary and autobiographical allusions, erotic subtexts and comical puns. In the content of Finnegans Wake, presented in Joyce’s signature style, I find examples of translation into literary language from the original that is a mode of narrative characteristic for dream experiences, events built of crumbs of reality, oneiric stories told differently each time. 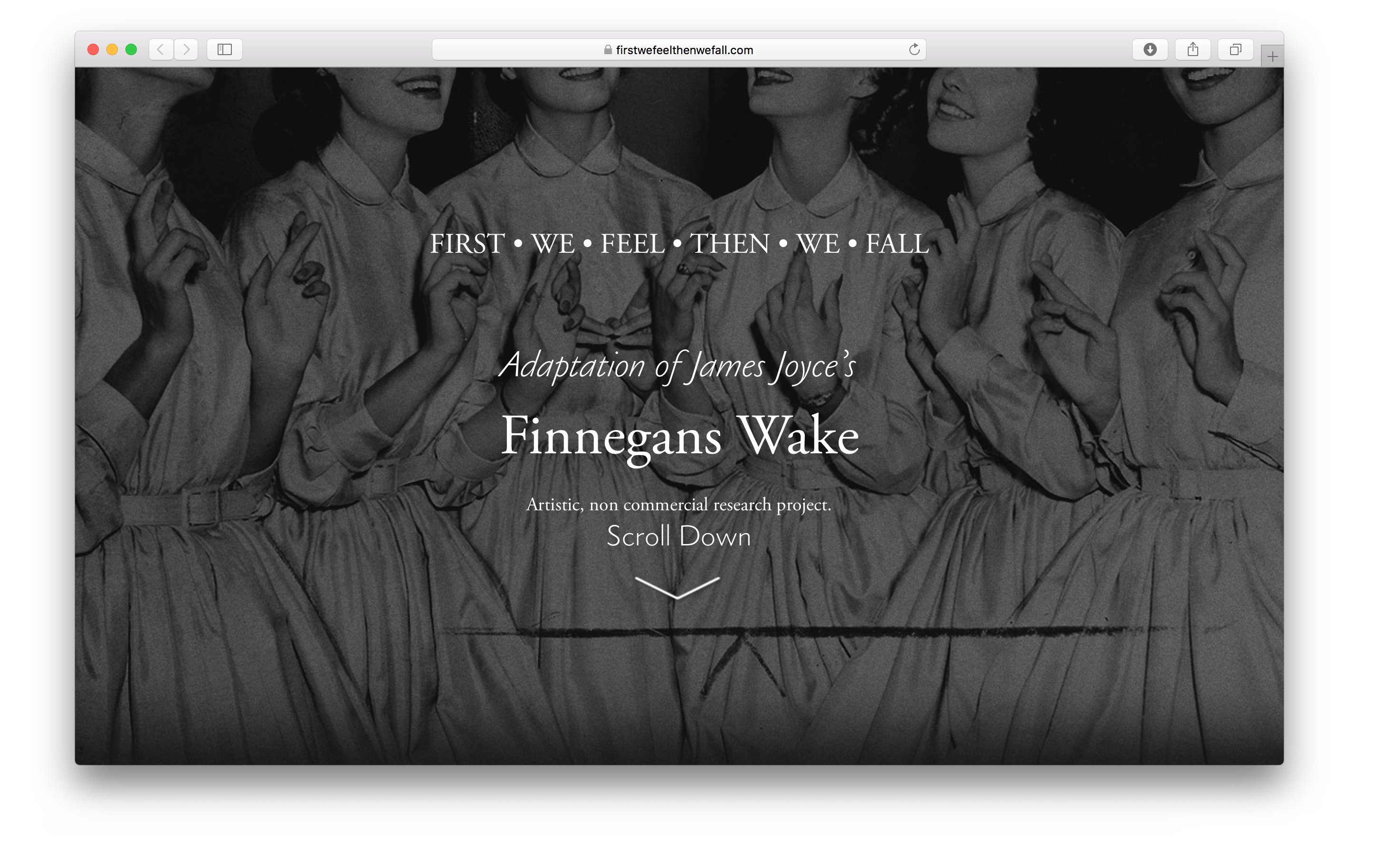 “The meandertale, aloss and again, of our old Heidenburgh in the days when Head-in-Clouds walked the earth.”
Finnegans Wake, page. 18

Umberto Eco’s 1971 semiotic diagram (The Limits of Interpretation, A Midland Book, Indiana University Press, Bloomington and Indianapolis 1994, illustration 9.2, p 141) shows a breakdown of the word Meandertale into meaningful components. It provided a model for my work on deciphering the text and for the work on its adaptation.

The newly constructed word Meandertale appears to signify the very name of the process that forms it; a meandering quest for associations between words where these associations simultaneously tell the story of their evolution and transform them. In such a well-ventilated world, perhaps one necessary constraint might be to assume that no word suffers more than six degrees of separation from any other.

Included by Umberto Eco in “The Aesthetics of Chaosmos”, this diagram shows how Meandertale, one of innumerable puns making up the textual labyrinth of Finnegans Wake, can be unpacked into three separate words. The image represents a network connecting meander, tale, and Neandertal, which combine to suggest a cluster of meanings. This Wakean pun clues us how to read the book: as a story wandering waywardly, looping backward and flashing forward, into the pre-historic past, and the origins of the human species. Working on the logic of associations, it hints at different interpretative paths, visualised by the wavy lines of the diagram. But at the same time it suggests that a single reading is impossible, and the only truesense is unattainable..

For me Finnegans Wake is a great collage. The layers of topography, meaning and narrative are unstable, changeable and open to many possible interpretations. For this reason in the visual layer I decided to differentiate modes of storytelling, to introduce a changeable intensification of editing sequences and work with heterogeneous visual materials. Already at an early stage of designing the narrative a question arose about the kind of visual style that FIRST WE FEEL THEN WE FALL ought to have. Joyce’s book which he had worked on for seventeen years was published in 1939 and its action is set in the mid-20th century (also present in it are references to world history, to the Bible and mythology). Therefore I had to make a decision whether to try and recreate this epoch, paying attention to all the components characteristic for that period (clothes, architecture, typography), or whether to create an autonomous audio-visual interpretation. I decided that the premises and references precisely echoing that historical epoch would limit free creativity – which, after all, was so characteristic for Joyce and tantamount to the work itself. 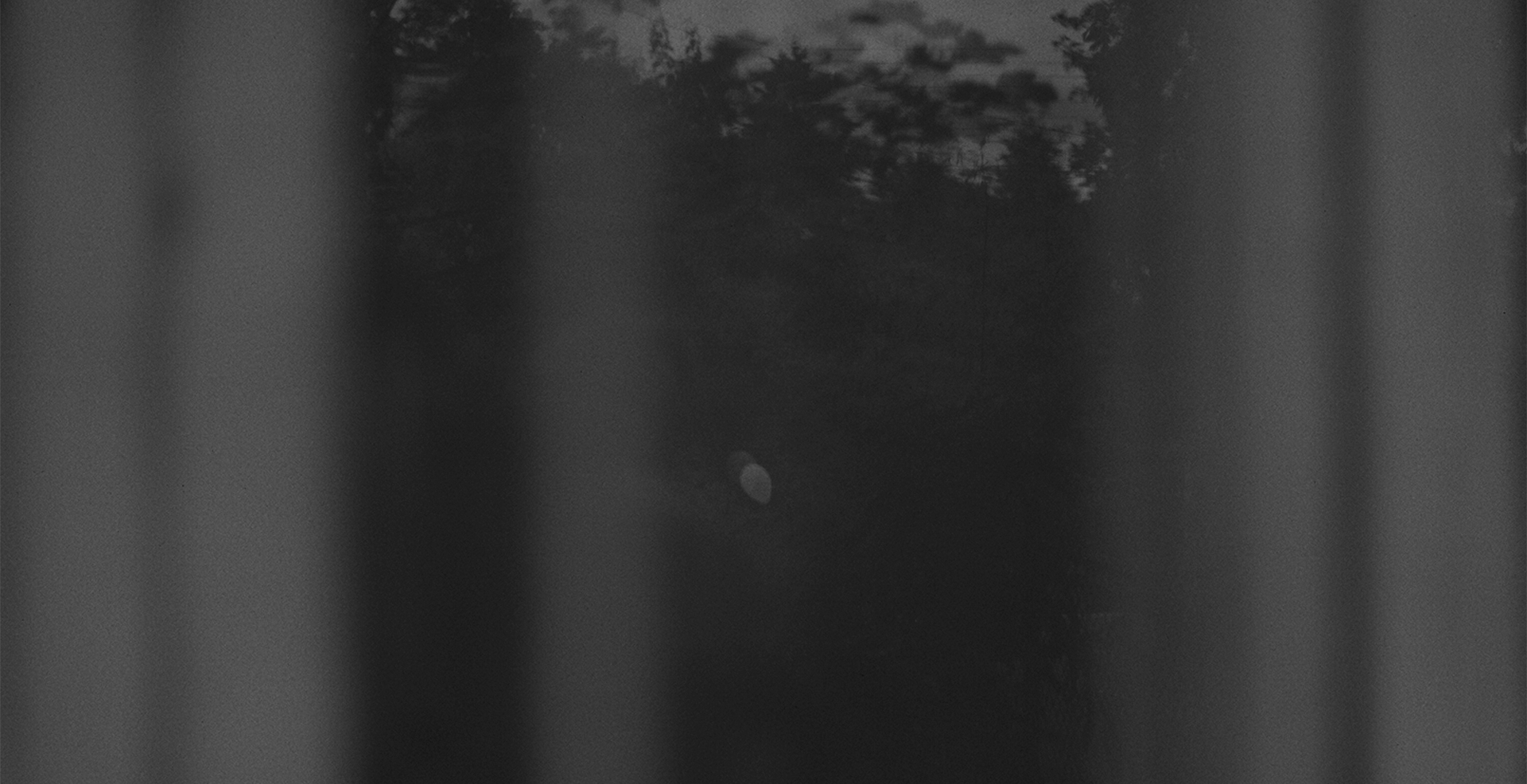 Therefore meanings in the book are changeable, unstable and relative. It depends on the reader to what extent s/he will be willing and able to confront it. The viewer becomes involved in the protocols of reading, protocols of viewing and in data analysis. 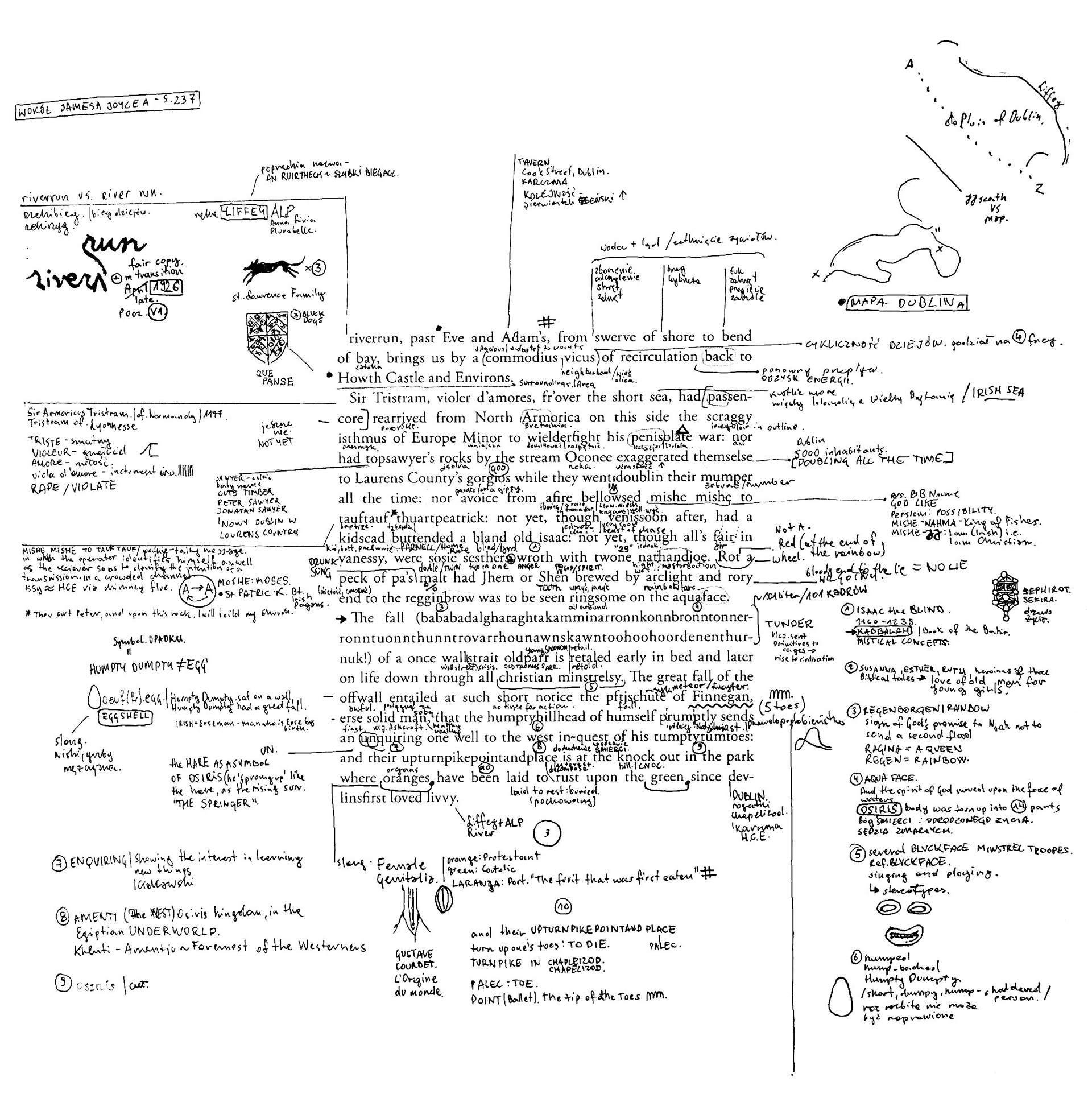 Finnegans Wake comprises 628 pages. The book is divided into four chapters. Turning the entire book into images was impossible, therefore the adaptation process had to be limited to a selected fragment or fragments which would then be translated into audio-visual language. Dr. Katarzyna Bazarnik created three separate narrative lines. Each of the three propositions had a hypertextual character, that is the text was not provided in its original sequence, but rather unfolded according to the logic of sound-image associations, as if following the leitmotif contained in the subtitle.

The translator of Finnegans Wake Krzysztof Bartnicki has said in an interview for Dwutygodnik.com that Finneganów Tren is “an attempt to test the limits of every language”. It would be interesting to transpose this attempt to the image. I have no doubt that Jakub Wróblewski will make sure that this image is “of quality”, considering his previous works. In addition, introduction of interactivity is by all means justified here – this unusual literary work is not linear in its assumption. I will venture saying that it is only the “new” media that allow the recipient to become “immersed” in Joyce’s world in such a multisensory manner.

I believe that the project FIRST WE FEEL THEN WE FALL – an adaptation of Finnegans Wake by James Joyce – is an important one. It analyses the relation between the word and the image, and it examines the viewer’s perception by offering her/ him an interactive system of building a narrative. In my view the proposed project can make a considerable contribution to the development of the problem of storytelling in the context of contemporary visual works.

Jakub Wróblewski has undertaken to update and translate into the language of visual arts the last and the most difficult work by Joyce. The concomitant effort (consultations in the fields of linguistics and cultural studies, overcoming problems related to interpreting individual parts of the text) significantly exceeds the framework of a standard visual work. Let me just mention that the Polish translator of Finnegans Wake needed ten years to complete his task.

Jakub Wróblewski intends to present Finnegans Wake in all its complexity – as a multilayered and multifaceted literary work which can be interpreted by means of languages other than the literary one, above all by means of image and music. Joyce’s work certainly permits such treatment, and what is more – it can even be said that it was designed by its author in a way which enables all possible interpretations in the spirit of a synthesis of the arts. In his interpretation Dr. Wróblewski wishes to employ modern multimedia techniques which may render access to Finnegans Wake more accessible to new recipients, not necessarily accustomed to wading through hundreds of pages of text.